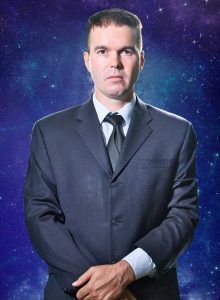 Multifaceted and self made, Grammaticus Macedon is from the county of Grevena, (the area of the ancient Kingdom Elimeia) but he was born and raised in the city of Kozani. Finished with high school in Kozani and continued with hard work and studies in the United States. Studies began at LaGuardia Community College of the City University of New York, and earned an AS degree in Math and Science with 140 credits. Able to enter the science program at the City College of New York (also known as the poor man's Harvard) of the City University of New York, Grammaticus continued studies. Studied sciences, mostly Biology, Chemistry Mathematics, but also had many credits in Physics, Geology, and Astronomy where he was taught by the famous astrophysicist Michio Kaku. Besides the University campus, Grammaticus attended classes at the back of the National Museum of Natural History in New York. There he felt living the centuries of evolution and felt impressed by the findings of animals with characteristics which have led to the resulting human species. At night, when the museum was closed and empty, he would find himself alone, walking next to dinosaur skeletons. At the same time, he took classes in music, ancient Greek and Latin, classic mythology, painting and drawing, philosophy, psychology, sociology, and many more. All these at a university where 13 Nobel Prize winner scientists came out of, and Einstein’s first speech took place in the United States.

At the same time, his love for theatre and cinematography led him to theatre studies where he earned a minor degree. In 1954 Woody Allen, Tony Curtis and other famous people of Theatre and Cinema studied in the same college.

Political figures, like Henry Kissinger and Colin Powell also studied there, as this particular University, in Harlem of New York was the most political tense in the country. The largest student club was that of the leftist Marxists, with Afro American and Latino students of suppressed social strata. Being open minded, Grammaticus got involved in such social clubs, and reopened and served as president of the Greek Club “Omiros”.

It is important to mention that during his studies, software of ancient Greek translations and deeper definitions were always open, for a deep study and understanding of Hellenic past and scientific terms. His internet presence was very intense, with participation in Groups that study all aspects of ancient Greek tradition.

Education was very demanding, in a college with many demands and a great drop out rate. After years of studies at the City University of New York, and with financial aid from the Federal and the State, he graduated.

But all these years, besides academic studies, there were the street smart studies there as well. Selling tripe soups at overnight restaurants, working at bars and live music halls, in restaurants. Teaching other lower level students and tutoring kids. He got employed at the large Afro-American organization Harlem Children Zone where although other teachers taught a science they studied, Grammaticus taught all sciences and math that students needed to pass exams and get into Universities. He had a special responsibility for geometry classes for weak students, where he was the one to create the lesson plan. During his teaching in Harlem, Grammaticus attended seminars at the Teachers College of Columbia University. At the same time he worked as a photographer, videographer, graphics designer, website designer, and fixing software and hardware computer issues. He also maintained a linux server.

At this time the basic activities of Grammaticus is into information systems, in screenwriting and preparation of a movie, creation of web content and a website for Hellenic empowerment.